A Most Perilous Journey

I have edited the New Testament, and much besides; and in order to do a service to the reading public I have thought nothing of a most perilous journey, nothing of the expense, nothing at all of the toils in which I have worn out a great part of my health and life itself.

Five hundred years ago, the great Dutch humanist Desiderius Erasmus of Rotterdam (1466-1536) published the first Greek New Testament and a new Latin translation, a landmark event in the development of the Bible and a sign of an emphasis on returning ad fontes (“to the sources”) that characterized developing reforms of the church. This exhibit celebrates this event by displaying all five editions of Erasmus’ Greek New Testament produced during his lifetime, allowing visitors to trace how the text changed over the decades of Erasmus’ work. Alongside these rare Erasmus editions, items in the exhibit highlight the changing form of the Bible in the 16th century and the development of Erasmus as a scholar and his philological and theological work in this critical time of reform. Prominent items on display include 15th century Bibles in Latin and German, early Erasmus editions of the church fathers and classical authors, examples of Erasmus’ interpretation of Scripture, Erasmus’ popular satire “Praise of Folly,” and responses highlighting the controversial nature of his work. The exhibit culminates in a celebration of Bibles influenced by Erasmus. On display are other major Greek and Latin Bibles of the 16th century and rare, early vernacular translations, including Luther’s Greek New Testament, Tyndale’s English Bible, and a first edition of the King James Bible.

In response to receiving Erasmus’ first edition of the Greek New Testament, his friend John Colet (1466-1519), Dean at St. Paul’s Cathedral, wrote “The name of Erasmus shall never perish.” We welcome you to this exhibit celebrating the fact that after 500 years, this sentiment remains true. 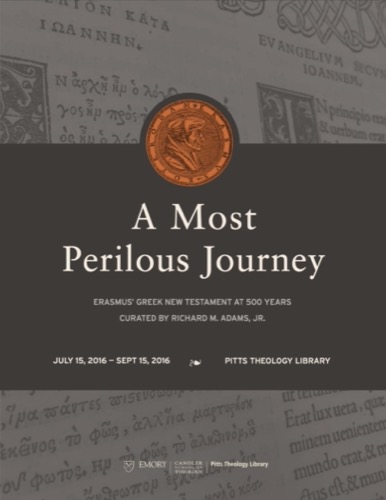