The Passover Haggadah across Time and Place

Curated by Adam T. Strater in collaboration with the Tam Institute for Jewish Studies

The Haggadah (literally, “the telling”) is the text that recounts the Israelites’ deliverance from Egyptian bondage and structures the seder service on Passover eve, but the Passover seder’s domestic nature has in turn shaped the Haggadah to tell us an additional story, the story of those who produced and used the individual Haggadot.

Dating from the time of the Mishna (second and third century CE), the Haggadah presents its narrative through a series of scriptural and Talmudic quotations, commentaries, rituals, blessings, and songs assembled in various combinations over the millennia. The Haggadah’s patchwork and domestic qualities provide a window into the development of Jewish religious cultures across time and place. This exhibit highlights the distinctive character of the Haggadah using collections donated by Rabbi David Geffen and Richard K. Goldstein to the Pitts Theology Library. There are also Haggadot, images, and artifacts provided by the William Breman Jewish Heritage Museum and the Stuart A. Rose Manuscript, Archives, and Rare Book Library. 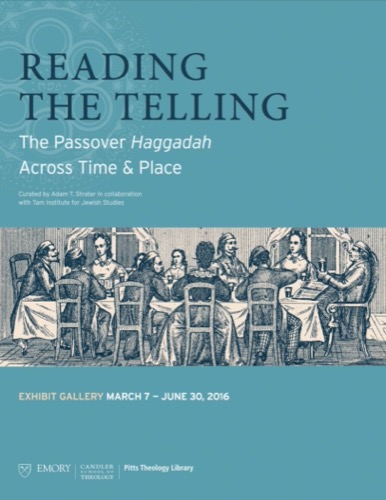